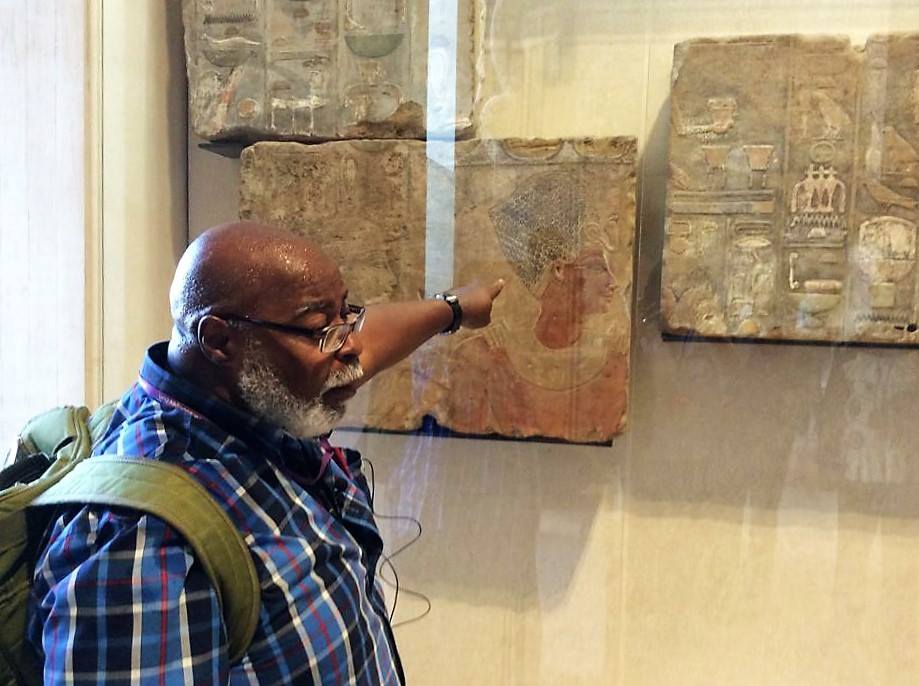 The classes are taught in a special Facebook group beginning at 9:00 PM US EST. The sessions take the form of focused online lectures and question and answer periods with Runoko Rashidi.

The cost of the course is only $50.00 per household, all of it used to subsidize Dr. Rashidi’s ongoing museum researches.

In addition to the instruction and commentaries by Runoko, scores of dazzling original photographs will be posted, bibliographic references will be provided and numerous sessions of the class will actually be taught during the course of Runoko’s international research trips.

The supporting texts for the classes are Dr. Rashidi’s own works–Black Star over Europe, the African Presence in the East: The Black Presence in Asia, and Uncovering the African Past: The Ivan Van Sertima Papers.

All of the class notes, questions and answers, photos and links will remain posted for the entire twelve weeks of the class.  So if you cannot be available for the live Friday evenings sessions you are free to peruse at your convenience and leisure.

No special equipment is required.  All you need is a Facebook account.  Please pay your tuition via Paypal to Runoko@hotmail.com or through Runoko’s Go Fund Me Campaign at https://www.gofundme.com/p65nfnfk.  Receipt of payments for the class will be acknowledged immediately.  Simply include your Facebook name and/or email address.

If you want to be on the cutting edge of researches pertaining to the Global African Presence or simply want to support Dr. Rashidi’s work this is the perfect way to do it.

The first week of the class looks at the scholars who pioneered our studies of the African presence in the classical civilizations of the ancient world.  We look at such women and men as George Wells Parker, Drusilla Dunjee Houston, William Leo Hansberry, George G.M. James, Chancellor Williams, Cheikh Anta Diop, Ivan Van Sertima and Yosef A.A. ben-Jochannan.

We begin our journey into Kmt and Kush by first defining what we mean as classical civilizations.  Then we look at the history itself.  We look at the great kings and queens, the nobility, the priests, the principal aspects of god in this ancient land.   We examine the origins and great moments in the ancient Valley of the Nile and what we can learn from the most shining example of classical civilization that we have record of.

Here we explore the classical civilizations of ancient Southwest Asia, an area thought by some to be a mere extension of Africa itself.  We look at the Levant, the Arabian Peninsula, Turkey, Iraq and Iran.  We look at the Blackheads of Sumer, the Immortals of Susa and the Elamites of Iran.

Join as we examine the African presence in the Shang, Tang and Yuan Dynasties of China, the Samurai and Shoguns of Japan, the classical civilizations of Thailand, Cambodia and Vietnam.

THE AFRICAN PRESENCE PRESENCE IN THE GRECO-ROMAN WORLD

Look at the African presence in world of ancient Greece and Rome.  We start on the island of Crete and the Aegean Sea, African mythological figures among the ancient Greeks, the presence of the African in early Italy, the Etruscans and Rome itself–Black popes, Black theologians, Black writers, Black senators, even Black emperors.

Who were the Moors, why are they important to us, what is their legacy will all be explored in this dynamic session.

THE OLMEC AND BEYOND: THE AFRICAN PRESENCE CLASSICAL MESO-AMERICAN CIVILIZATION

A little known chapter in history will be examined here as we show beyond sane rebuttal the African presence in the Americas beforeColumbus and before slavery! We travel from Mexico to Peru and leave no stone unturned!

We wrap up the course with a free flowing question and answer period and discussion.